Home » Uncategorized » How to form the next government in Italy

How to form the next government in Italy

It is by no means an easy task to construct a majority coalition government which is representative of the March 4th electoral results.In terms of percentages and votes, there are two indisputable winners: the Five Star Movement (Movimento 5 Stelle, M5S) is by far the most voted party; the centre-right coalition has gained more votes and more seats than any competitor. Within the Italian centre-right, the Lega has almost quadrupled its votes. There are also two ascertained losers: the Democratic Party sunk to its lowest percentage ever, while Belusconi’s Forza Italia lost more than four million votes. Numerically, there are four potential coalitions, ranked according to the number of seats they have in the two Houses: M5S plus centre-right; centre-right plus Democratic Party; M5S plus Democratic Party; M5S plus Lega (see Fig. 1). Politically, however, crisscross vetoes seem to have ruled out two of those coalitions already.

Fig. 1. Potential majority coalitions in the Chamber of Deputies and in the Senate 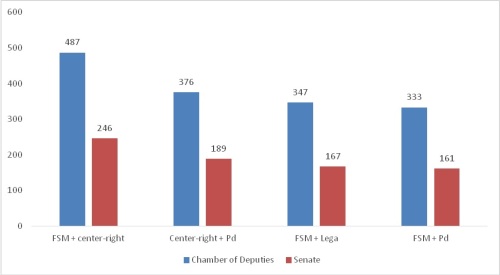 In fact, since the Five Star Movement does not want Berlusconi to participate in a coalition, and Salvini has so far proved unwilling to abandon the centre-right, two of the possible coalitions involving the M5S have been ruled out. Furthermore, the Democratic Party has rejected the offer by the M5S to reach an agreement on the next government. The centre-right, finally, has not indicated any willingness to make a proposal to the Democratic Party, though in a way the door has been left open for some support coming from Renzi’s parliamentarians. In Berlusconi’s and Meloni’s views, the President of the Republic ought to appoint an exponent of the centre-right to the position of Prime Minister, arguably Matteo Salvini whose Lega has won more votes than Forza Italia and Fratelli d’Italia. Then it will be up to Salvini to find the parliamentary votes necessary to reach an absolute majority. This proposal is neither absurd nor far-fetched, but it goes against the preferences of all the former Presidents of the Republic, that is, not to play games when appointing the Prime Minister. Indeed, previous Presidents – most recently and notably, Giorgio Napolitano – have explicitly asked potential Prime Ministers to ensure that they could reasonably count on more than a razor-thin parliamentary majority, let alone a minority.

Either way, it is important to stress that the logic of parliamentarism does not imply that the cabinet must be formed exclusively by those parties that have won more votes at election time. As Table 1 shows, it is partly true and partly false that winning parties automatically get into the governmental coalition. This statement is an oversimplification with little or no empirical underpinning, usually expressed by Italian right-wing politicians and commentators who just try to argue their case. Many other factors, such as the ideological compatibility between potential allies and their more or less consistent strategies, will have to be taken into consideration – as the Große Koalition, formed in Germany barely two months ago, tellingly shows.

Table 1. Electoral performances of political parties in the 2017 and 2016 legislative elections in Western Europe 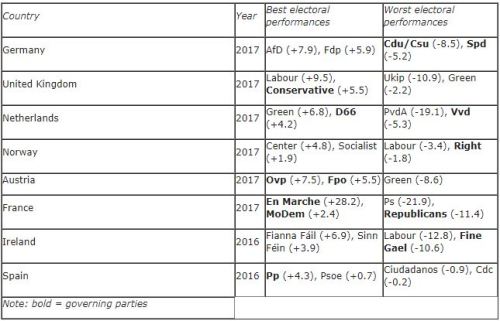 What is also going on in Italian politics is the lingering discussion about constitutional issues. The centre-right claims that it is high time to reverse the trend of “unelected governments”, as if Italians – or, for that matter, the voters in any parliamentary democracy – could directly elect their government, thus ignoring the fact that voters can only elect the parliament where governments are formed, transformed, replaced. The Democrats, piloted by their former secretary Matteo Renzi, insist that the present situation is the inevitable consequence of the defeat of their constitutional reforms in the December 4th, 2016 referendum, and of the Constitutional Court’s sentence that declared some features of their electoral law (dubbed Italicum) unconstitutional. In reality, Renzi’s constitutional reforms did not contain any measures that would strengthen the government and there is no way to assess the likely impact of the Italicum on the parties and the party system. More than twenty years of uninformed and manipulated discussions of what a parliamentary democracy is, as well as the continued search for partisan electoral laws, are creating a destructive confusion among parliamentarians, political commentators (in Italy and abroad) and public opinion at large.

The idea recently launched by Matteo Renzi, that only those willing to put forward and approve major constitutional reforms as well as a new electoral law should be allowed to create the next government, in order to overcome the political impasse, seems to be yet another improvised ballon d’essai with no substance.